What Happened on September 24th – The First Supreme Court

The Judiciary Act of 1789 is passed by Congress and signed by President George Washington, establishing the Supreme Court of the United States as a tribunal made up of six justices who were to serve on the court until death or retirement.

That day, President Washington nominated John Jay to preside as chief justice, and John Rutledge, William Cushing, John Blair, Robert Harrison, and James Wilson to be associate justices. On September 26, all six appointments were confirmed by the U.S. Senate.

photo credit: FrogMiller, close up of US Constitution from National Archives

On February 1, 1790, the first session of the U.S. Supreme Court was held in New York City’s Royal Exchange Building. 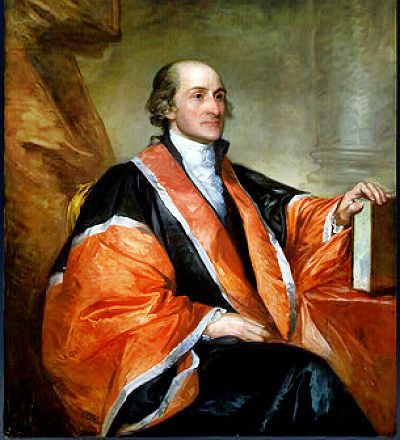 John Jay, First Session of the US Supreme Court 1790

The U.S. Supreme Court grew into the most important judicial body in the world in terms of its central place in the American political order. According to the Constitution, the size of the court is set by Congress, and the number of justices varied during the 19th century before stabilizing in 1869 at nine. In times of constitutional crisis, the nation’s highest court has always played a definitive role in resolving, for better or worse, the great issues of the time.