STORIES FROM A TIME OF WAR

This month in the April A to Z Challenge, I am posting about books, fiction, and nonfiction that are about or set in the Second World War.  The war and the people who experienced it have stories to tell and these stories are so overwhelming they lend themselves to greatness.  I encourage you to sample some of these stories.  I promise you will not regret taking the time.  To help me develop an alphabetical list for this challenge, I used Goodreads.com.  Did you know that there are more than 883 fiction and 480 nonfiction books in this genre on the website’s Listopia as voted on by members?  That is a lot of stories and facts just waiting for us to explore. 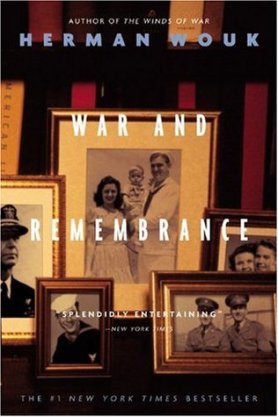 Well known for the two blockbuster television mini-series, these novels by Herman Wouk, the Winds of War and War and Remembrance, tell the saga of an American family caught up in the Second World War. In the Winds of War, the entire story of the Henry family and those who interact with them is set against the backdrop of World War II. There are evaluations of the war as seen from those involved and from a German officer’s writing. The story comes to a close as Pearl Harbor is bombed by the Japanese. The second book, War and Remembrance, continues the story from that point and follows with great fidelity the major events of World War II.  The novel begins with the Japanese attack on Pearl Harbor and ends with the dropping of the atom bomb on Hiroshima. All major battles on land and sea are covered. Japanese, American, and German war aims are fully explored and analyzed, including the development of the atom bomb and of the concentration camps. Domestic life in the United States during the war, the acute suffering of the Soviet people during the German invasion, and the collapse of the British Empire in the Far East all receive significant attention. As a result, the global dimensions of the war become the primary concern of the novel.

Don’t stop there.  So many other books about or set in the time of war are available.  Here are a few links to Goodreads:

Wave of Terror by Theodore Odrach

Where Eagles Dare by Alistair MacLean

The Way Back to Florence by Glenn Haybittle

War of the Rats by David L. Robbins

With the Old Breed: At Peleliu and Okinawa by Eugene B. Sledge, Paul Fussell (One of the books used as a basis for the HBO television series, The Pacific)

We Band of Angels: The Untold Story of American Nurses Trapped on Bataan by the Japanese by Elizabeth M. Norman