What Happened on May 9th – Captain Blood and the Crown Jewels

The Wonderful Story of Britain: Stealing the Crown Jewels. The robbers gag the old keeper and then Captain Blood picks up the crown as the second man grabs the orb, while the third begins to file the sceptre in two, so that it can be easily hidden. Original artwork from Treasure no. 128 (26 June 1965).

In London on May 9, 1671, Thomas Blood, an Irish adventurer better known as “Captain Blood,” is captured attempting to steal the Crown Jewels from the Tower of London.  Was he executed for his efforts?  Let’s see.

First a little background leading up to his run in with the Crown Jewels.  He was a Parliamentarian during the English Civil War and as a result of the restoration of the English monarchy in 1660, he was deprived of his estate in Ireland.  So began his efforts to even the score. 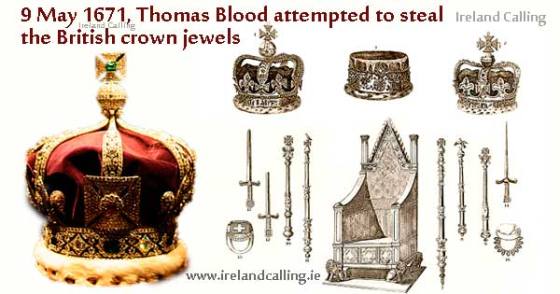 With his latest plan in place, on May 9, 1671, Blood, disguised as a priest, managed to convince the Jewel House keeper to hand over his pistols. Blood’s three accomplices then emerged from the shadows, and together they forced their way into the Jewel House. Unexpectedly, the keeper’s son showed up.  Blood and his cronies were caught in the act.  An alarm went out to the Tower guard but before one man shoved the Royal Orb down his breeches while Blood flattened the Crown with a mallet and tried to run off with it. The Tower guards apprehended and arrested all four of the perpetrators, and Blood was brought before the king. Charles was so impressed with Blood’s audacity that, far from punishing him, he restored his estates in Ireland and made him a member of his court with an annual pension.

Captain Blood became a colorful celebrity all across the kingdom, and when he died in 1680 his body had to be exhumed in order to persuade the public that he was actually dead.

Here is a bit of humor.