BLOGGING FROM A TO Z

Be sure to visit my News and Noteworthy post today as well.

The A to Z Challenge has dueling decades going on.  Check out the 1980s theme from a fellow blogger HERE 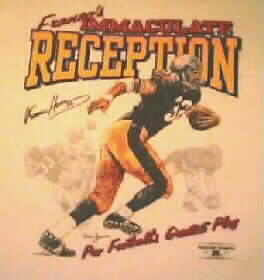 On December 23, 1972, in a controversial play that is known as the “Immaculate Reception,” rookie running back Franco Harris of the Pittsburgh Steelers grabs a deflected pass from quarterback Terry Bradshaw to score a touchdown, winning the game for the Steelers 13-7 over the Oakland Raiders.

You can watch the video from NFL films at the following link.  It could not be embedded.  https://youtu.be/15_9TjRyP58

The historic play took place during the semifinal playoff game of the American Football Conference (AFC), in Pittsburgh. Ken Stabler of the Raiders scored a touchdown with 73 seconds left in the game, putting Oakland up 7-6. Things looked dark for the Steelers, a struggling franchise that had finished 31 of the previous 39 seasons  with a losing record. Bradshaw’s pass, launched from the  Steelers’ 40-yard-line, was intended for halfback Frenchy Fuqua. When the Raiders safety Jack Tatum collided with Fuqua at Oakland’s 35-yard-line, the ball bounced backwards in a huge arc for a total of seven yards, where Harris scooped it up before it hit the ground and ran 42 yards into the end zone. 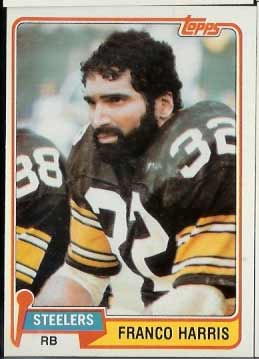 Though one official, Adrian Burk, immediately ruled the play a touchdown, there were no other signals. Tatum swore he didn’t touch the ball and that it had bounced off Fuqua and ricocheted towards Harris; this would have made Harris’ play illegal, according to a rule at the time stating  no two receivers can touch the ball consecutively on the same play. From a dugout on the sidelines, referee Fred Swearingen got on the phone with Art McNally, the NFL’s supervisor of officials. McNally had access to the instant replay on television from his seat in the press box, and confirmed Swearingen’s ruling that Tatum had touched the football, making Harris’ play a touchdown. In his post-game comments, Raiders coach John Madden  indicated that he believed Tatum had made contact with the ball.

The following week, also in Pittsburgh, the Steelers lost the AFC championship game to the undefeated Miami Dolphins, who went on to win Super Bowl VII. The Immaculate Reception marked the end of Pittsburgh’s years of futility, however, as the Steelers became a dominant force in the NFL over the next decade, winning four Super Bowls by 1980.

A to Z on the Music Charts

A to Z At the Movies

The first remake of the classic horror film, Invasion of the Body Snatchers came on the silver screen in 1978.  Set in San Francisco, Matthew Bennell (Donald Sutherland) assumes that when a friend (Brooke Adams) complains of her husband’s strange mood, it’s a marital issue. However, he begins to worry as more people report similar observations. His concern is confirmed when writer Jack Bellicec (Jeff Goldblum) and his wife (Veronica Cartwright) discover a mutated corpse. Besieged by an invisible enemy, Bennell must work quickly before the city is consumed.

All images in this article are in the public domain. For any YouTube clips embedded in my posts, I am not the uploader.