This Week in #WW2 – Death of a Nazi and a Collaborator

The Death of a Nazi and a Collaborator

A year apart on October 15th, a Nazi and a Nazi collaborator both met their death. One by firing squad and one by his own hand.

On October 15, 1945, Pierre Laval, the puppet leader of Nazi-occupied Vichy France, is executed by firing squad for treason against France.

Originally he had pacifist tendencies but he shifted to the right in the 1930s.  He had been the minister of foreign affairs and twice as the French premier.  With his anti-communist ideologies, he delayed the Soviet-Franco pact of 1935 and sought to align France with Fascist Italy.  He had no desire to declare war on Germany so he encouraged the antiwar faction in the French government.  With the German invasion of France in 1940, he used his political influence to force an armistice with Germany.  When Henri Pétain took over the new Vichy state, Laval served as minister of state. Laval was dismissed by Pétain in December 1940 for negotiating privately with Germany.  Just two years later, Naval had the trust of Adolf Hitler and Pétain became merely a figurehead in the Vichy regime. A puppet of Hitler, Laval collaborated with the Nazi programs of oppression and genocide.  When the allies liberated France, he was forced to flee east for German protection. With the defeat of Germany in May 1945, he escaped to Spain but was expelled and went into hiding in Austria, where he finally surrendered to American authorities in late July. Extradited to France, Laval was convicted of treason by the High Court of Justice in a sensational trial. Condemned to death, he attempted suicide by poison but was nursed back to health in time for his execution, on October 15, 1945.

One year  later on October 15, 1946, Herman Goering, commander in chief of the Luftwaffe, president of the Reichstag, head of the Gestapo, prime minister of Prussia, chief forester of the Reich, chief liquidator of sequestered estates, supreme head of the National Weather Bureau, and Hitler’s designated successor dies by his own hand.

An early member of the Nazi Party, Herman Goering had been present at the failed Munich Beer Hall Putsch.  That was 1923 and his injuries from that event would serve to make him addicted to painkillers.  Despite this, he became instrumental in Hitlers plans which included the creation of the concentration camps for political enemies.  He was ostentatious and self-indulgent demonstrated by his need to change his uniform five times daily and his flaunting of his decorations, jewelry and stolen artwork.  In 1938, it was he that instigated the Kristallnacht pogrom and initiated the “Aryanization” policy confiscating Jewish property and businesses. Soon Goering’s importance in the Party dropped because he failed to win the Battle of Britain and prevent the Allied bombing of Germany. As the war progressed, he dropped into depressions and continued to battle drug addiction. In fact, he had a stash of paracodin pills, a morphine derivative when he was captured by the United States after Germany’s surrender. 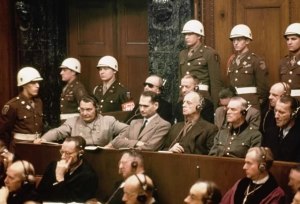 Defendants at Nuremberg Trials: The Nuremberg Trials were a series of trials held in Nuremberg, Germany in 1945â€“46 where formerÂ NaziÂ leaders were tried as war criminals by the International Military Tribunal. The indictment filed against them contained four counts: crimes against peace, crimes against humanity, war crimes and ” a common plan or conspiracy to commit” the criminal acts listed in the first three counts. (Photo Credit: Corbis)

Tried at Nuremberg, charged with various crimes against humanity and despite a vigorous attempt at self-acquittal, he was found guilty and sentenced to be hanged.  Before he could be executed, he committed suicide by swallowing a cyanide tablet he had hidden from his guards.