What Happened on August 26th – Riots at the Democratic National Convention

1968 was a year of unrest and June 26 was no exception.  A year with a Presidential election and the Vietnam War was in full swing.  As the Democratic National Convention opened in Chicago, Illinois, thousands of antiwar demonstrators began protesting in the streets.  They were protesting the war and the top Democratic presidential candidate, Vice President Hubert Humphrey who supported the war.  The 1968 convention was the most violent in U.S. History.  The police and National Guardsmen clashed with the protesters and the violence even spilled into the convention.  Hundreds of people, including innocent bystanders were beaten by the Chicago police.  Inside the convention, guards roughed up delegates and members of the press.  This included CBS News correspondent Mike Wallace who was punched in the face.  By August 29th, Humphrey secured the nomination and the convention ended. 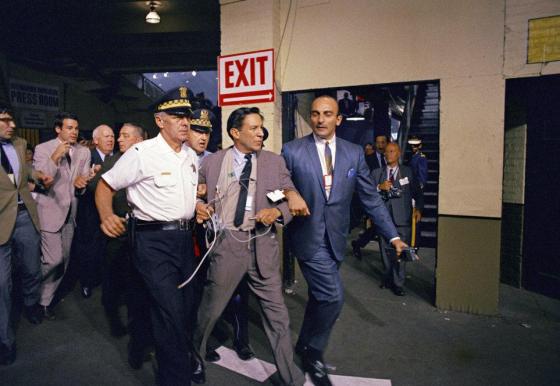 Mike Wallace (R.I.P. 2012) took a sock in the jaw while covering the tumultuous 1968 Democratic convention in Chicago, where he was hustled off the floor in the aftermath.

The investigation following the violence identified the confrontations as a “police riot” and blamed Mayor Richard Daley for inciting his police to violence.  From the riots, eight political radicals known as the “Chicago Eight” were arrested on  charges of conspiring to incite the violence.  The trial that began in 1969 sparked a new wave of protests in Chicago.