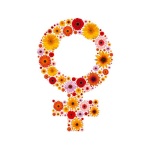 Throughout history women have made their mark in a wide variety of ways.  Each Saturday I plan to highlight one of these remarkable women.  There will be no limit to the areas of history that I may include; however as a guide I will look to the month of their birth, the month of their death or the month associated with their mark in history when I select them.  Is there an outstanding women in history you would like me to include?  I welcome your suggestions.  Would you like to guest blog one of the world’s outstanding women?  Let me hear from you.

Before I was ever in my teens, I knew exactly what I wanted to be when I grew up. My goal was to be the greatest athlete that ever lived.

Athlete and Olympic champion Babe Didrikson Zaharias was born Mildred Ella Zaharias on June 26, 1911, in Port Arthur, Texas, the daughter of Ole Didrikson and Hannah Marie Olsen. Her father and mother were from Norway, where her mother had been an outstanding skier and skater. Her father was a ship’s carpenter and cabinetmaker. The family, who spelled their name Didriksen, moved to Beaumont, Texas, when Mildred was 3.

Times were often difficult for the large Didrikson family, and as an adolescent Mildred worked at many part-time jobs, including sewing gunny sacks at a penny a sack. Her father, a firm believer in physical conditioning, built a weight-lifting apparatus out of a broomstick and some old flatirons. Mildred, called “Baby” in her early years, was always competitive, interested in sports, and eager to play boys’ games with her brothers. After hitting five home runs in one baseball game, “Baby” became “Babe” (Babe Ruth was then in his heyday), a nickname that remained with her for the rest of her life.

At the age of 15, Babe was the high-scoring forward on the girls’ basketball team at Beaumont Senior High School. She attracted the attention of Melvin J. McCombs, coach of one of the best girls’ basketball teams in the nation. In February 1930, McCombs secured a job for her with the Employers Casualty Company of Dallas, and she was soon a star player on its Golden Cyclones. She returned to Beaumont in June to graduate with her high school class. The Golden Cyclones won the national championship the next three years, and she was All-American forward for two of those years.

Didrikson soon turned her attention to track and field. At the National Women’s AAU Track Meet in 1931, she won first place in eight events and was second in a ninth. In 1932, with much more interest in the meet because of the approaching Olympics, she captured the championship, scoring 30 points; the Illinois Women’s Athletic Club, which entered a team of 22 women, placed second with 22 points. Babe then went to the Olympics.

Women were allowed to enter only three events, but she broke four world records; she won the javelin throw, with 143 feet, 4 inches, and won the 80-meter hurdles, twice breaking the previous world record (her best time was 11.7 seconds). She made a world record high jump, but the jump was disallowed and she was awarded second place.

The noted sports writer Paul Gallico remarked, “On every count, accomplishment, temperament, personality, and color, she belongs to the ranks of those story-book champions of our age of innocence.” Gallico also referred to her as “the most talented athlete, male or female, ever developed in our country.”

Didrikson began playing golf in 1931 or 1932. According to Gallico, in 1932, in her 11th game of golf, she drove 260 yards from the first tee and played the second nine in 43. She herself stated that she entered her first golf tournament in the fall of 1934. Although she did not win, she captured the qualifying round with a 77. In April 1935, in the Texas State Women’s Championship, she carded a birdie on the par-5 31st hole, to win the tournament two-up. 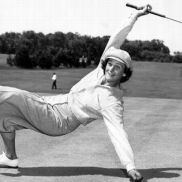 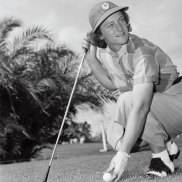 In the summer of 1935 she was declared a professional because of an unauthorized endorsement. She accepted the decision and for several years traveled about the country giving golf exhibitions. She also appeared on the vaudeville circuit with a number of different acts. She was the only woman on the Babe Didrikson All-American basketball team and played a few games with the House of David baseball team.

It was during these years that she pitched an inning for the St. Louis Cardinals in an exhibition game with the Philadelphia Athletics. She excelled at almost everything she tried: when only 16 she won a prize for a dress that she had made, at the Texas State Fair; she could type 86 words a minute; she could throw a baseball from deep center field to home plate—once a throw of hers was measured at over 300 feet. 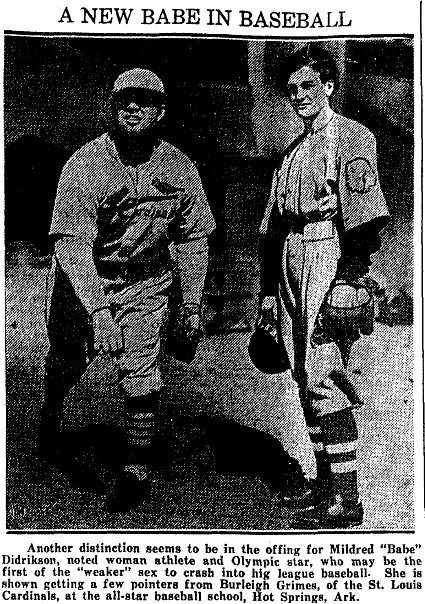 In January 1938, Didrikson met George Zaharias, a professional wrestler often billed as “The Crying Greek from Cripple Creek,” at the Los Angeles Open. She was attracted to this hulk of a man who could drive a golf ball farther than she. On December 23, 1938, they were married. They had no children.

Urged by her husband, she applied for reinstatement as an amateur golfer in 1941 and was reinstated in January 1943. Utilizing her tremendous powers of concentration, her almost unlimited self-confidence and her patience, she began to take up golf seriously. She would drive as many as 1,000 balls a day, take lessons for five or six hours, and play until her hands were blistered and bleeding.

In 1947, Zaharias became the first American woman to win the British Ladies’ Amateur Championship, at Gullane, Scotland. On one hole she stroked a drive so far that a spectator whispered, “She must be Superman’s sister.” That August she announced that she was turning professional. For the next six years she dominated women’s golf.

Zaharias had a cancer operation in April 1953, and it was feared she would never be able to return to competition. Three and a half months later, though, she played in competition. The next year she won the United States Women’s Open by twelve strokes. 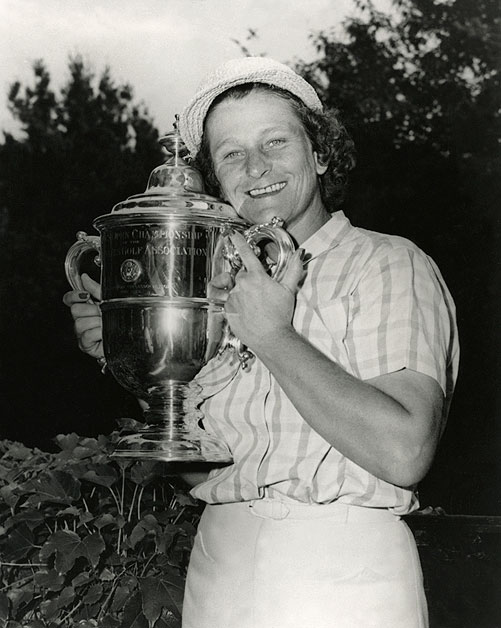 In 1955 she had a second cancer operation. She died in Galveston, Texas. In the last months of her life she and her husband established the Babe Didrikson Zaharias Fund to support cancer clinics and treatment centers. http://www.babedidriksonzaharias.org/

Zaharias was the greatest woman golfer of all time, the winner of seventeen successive golf tournaments in 1946-1947, and of 82 tournaments between 1933 and 1953. The Associated Press voted her “Woman of the Year” in 1936, 1945, 1947, 1950, and 1954. In 1950 the AP acclaimed her the “Woman Athlete of the Half Century.” The skinny, shingle-headed teenager, a shy and socially immature girl who could win at sports but usually antagonized her fellow competitors, became a poised, well-dressed, graceful and popular champion—the darling of the galleries—whose drives whistled down the fairways and whose comments won the hearts of the spectators.

Paul Gallico paid perhaps the finest tribute to her: “Much has been made of Babe Didrikson’s natural aptitude for sports, as well as her competitive spirit and indomitable will to win. But not enough has been said about the patience and strength of character expressed in her willingness to practice endlessly, and her recognition that she could reach the top and stay there only by incessant hard work.”

I first heard about her in a television movie from 1975 titled Babe starring Susan Clark.