Sunday Photo Fiction Challenge – An Island Out of Nowhere (Part 2)

The Assignment: The idea of Photo Fiction is to write a story of around 100-200 words (which is also called Flash Fiction) based on a photo as a prompt. In this particular photo fiction, the story must be based on the photo below.  I am writing another serial story.  Check out part 1.  Here is part 2.

Source: Sea King Rescue Helicopter and Lifeboat at a Coastal Display in July 2011

A few hours later, a helicopter arrived from Command.  With no place to land, forensic specialists from the FBI were lowered onto the abandon commercial craft to investigate.  The chief investigator boarded the USCG cutter.

“Welcome aboard, Agent Smith.  I was briefed on the FBI’s involvement,” said Lieutenant Markel.

“What can you tell me about the progress on the island?”

“I get a report hourly and there has been nothing significant so far.”

Meanwhile, Captain Wonder and his crew were exploring the mysterious island.  The men were amazed at its size and have been walking through the thick forest for hours finding no evidence of life other than botanical.  Continuing the use of machetes to cut their way through the thick vegetation, they suddenly heard the noise of large machinery.

“Stop! We need to approach in stealth mode.  We do not know if it is friend or foe,” ordered Captain Wonder.

Using the trees for camouflage, the crew approached a clearing.  The men gave a collective gasp.  They couldn’t believe what they were seeing.  It was like watching those old newsreels from the 1940s. 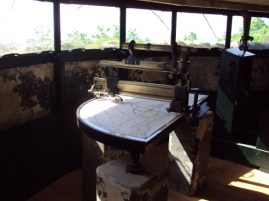